a cover for the iPad I don't even have

Three days ago I saw this iPad cover tutorial by Amber of One Shabby Chick. And for some reason, I just had to make one. Immediately. So I used a gift certificate to one of my local quilt shops and picked up the Alexander Henry Heath fabric I've been eyeing for a long time. The I sewed this up during this morning's naptime. 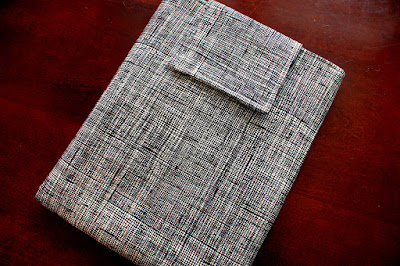 It's lined with a teal moda crossweave and will house the new-to-me iPad that I'll inherit from Rob once the second generation version comes out later this spring. That's right. This thing won't get used for months, because there is no way Rob is going to forego his nice leather case for this one. Which is alright by me. 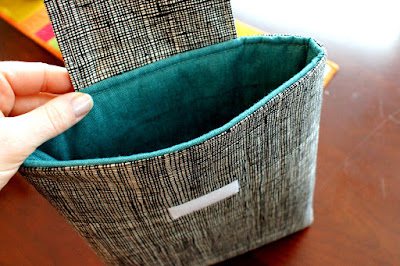 Although, I really could have used his iPad today. I kept having to come back upstairs to view the tutorial on the kitchen computer, then remember the instructions on my way back down to the sewing room. Because of this, I messed up on the placement of my velcro and had to re-do it after the cover was all done so that the flap would work. I realized how great it's going to be when I can take a look at my favorite websites and blogs right there on my sewing table!
Posted by Krista at 12:14 PM

It looks fantastic! So glad the directions were ok - I was a little nervous about making sure everyone would understand the pattern.

Noyce! That's my biggest beef with using online tutes, lugging the laptop down to my sewing room and having to park it on top of the stairs (no room on the table!) to reference! Hmmm, one more possible reason to get an iPad (my kids don't need any more reasons, that's for sure).

My friend made me an iPad cover for the iPad I wanted for Christmas and gave it to me early so I could show my husband. It worked and I got my iPad and I love it. Your cover is great, love the fabric.

Oh my goodness! I can't imagine! Last night I joked to my husband: "I'm going to go sew; where's my computer?" I park my computer right next to my sewing machine on a rolling cart that holds my accesories. I pull up my pattern on one tab and toggle between that and The Bachelor. I hope you get your iPad soon!

I love the fabric's you used. If my computer was in the same room as my sewing machine I might never get any sewing done...you know...all those blogs to read..all those pictures to look at.

I love the fabric! I'm super jealous you're getting an ipad, even if you have to wait.

How funny. I don't have an "i" anything. I am starting to feel really left out!

Rachel at Stitched in Color said...

Amy, I don't have an "I" anything either. Oh well. But, hey, I've had my eye on that same fabric. Wow, it looks super great in person!!!

this is so perfect for your upcoming ipad! so cute!

I'm very jealous. Of the forthcoming i-pad (I can convince my husband I NEED one..) and of the cover. Beautiful fabric!!

i love this...and i love using my husbands i pad. it got me through many nights of pumping in the middle of the night.

Ha! That's what I use my iPad for the most: tutorials and recipes.

Excellent cover. You'll love it when you get your hands on it.

Blogs That I Love